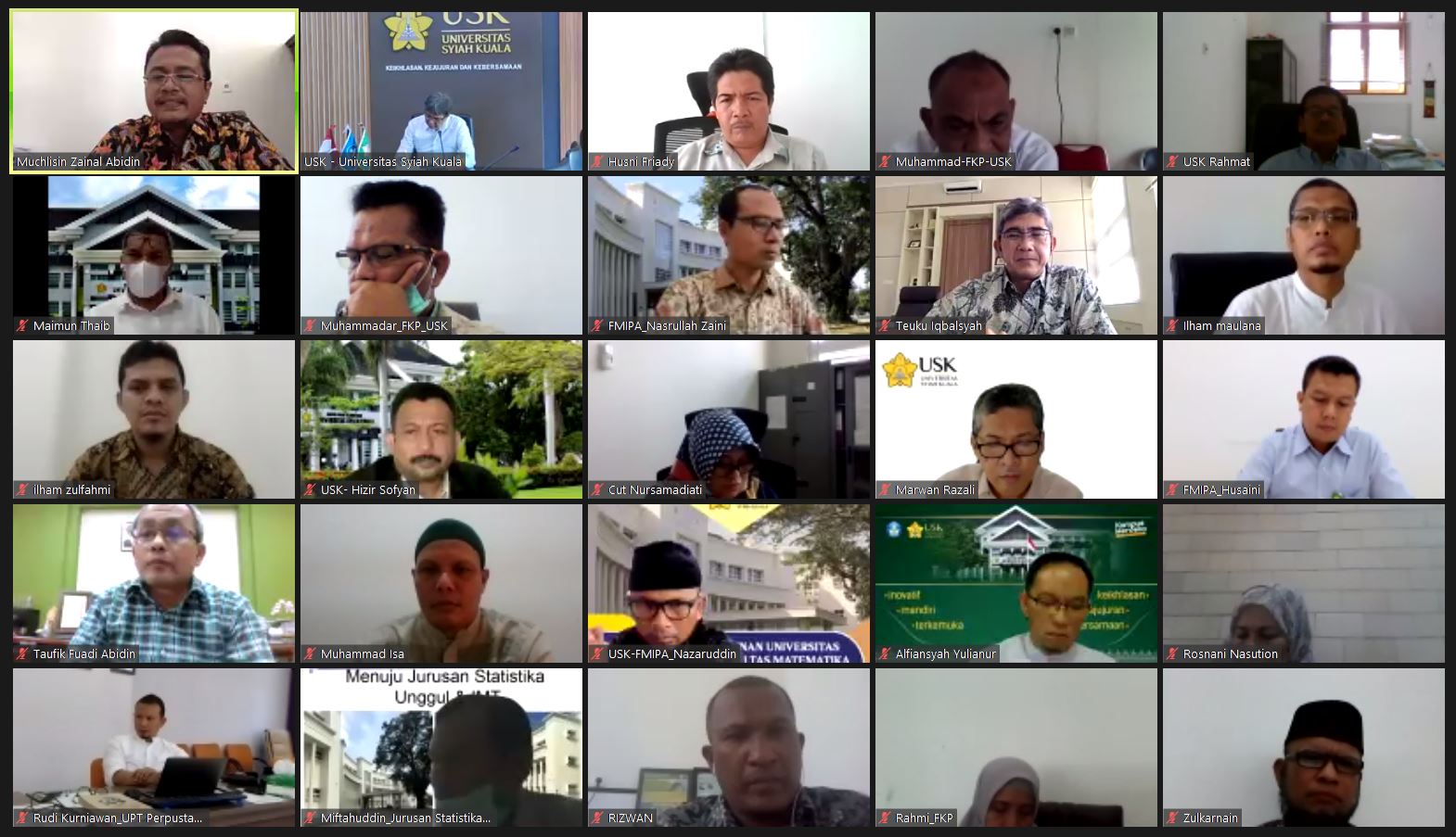 The Rector of USK, Prof. Dr. Ir. Samsul Rizal, M.Eng on his virtual Safari Ramadan visited the Faculty of Mathematics and Natural Sciences (FMIPA) and the Faculty of Marine and Fisheries (FKP) in which the rector received inputs and listened to aspirations from the faculty staff.  (Banda Aceh, 28 April 2021).

The Dean of FMIPA, Dr. Teuku Mohammad Iqbalsyah, M. Sc in his remarks reported that during the Covid-19 pandemic they had several challenges in implementing some of their programs. Additionally, there were also concerns about some building functions.

“We first settled in the new building about one and half a year ago. Lately, some problems started to occur. We want to take care of the physical problems soon so that it would not spread. However, we are also limited on the funds and therefore would need support from the university.”, as Dr. Teuku Mohammad Iqbalsyah said.

Meanwhile, the Dean of FKP, Prof. Dr. Muchlisin Z.A, S.Pi, M.Sc reported about their small laboratory. The limited space somehow hindered the students’ activities in the lab, especially those who were involved in research. This matter had become their focus along with the broken elevator in their building.

“Regrettably, with the lab condition, the Dean had an initiative to be moved backward. However, this is disturbing the view. If possible, we could add (the space) a little more and seal it with some cement. We could also add a fence. The lift had been broken twice. We fixed the first one, but not the current one.”, as said by Prof. Muchlisin Z.A.

The condition of the lab also affected the students’ research. For example, when they were keeping fish in the lab and its location was a bit far from the main building, the fish might die so it was not very safe. This may potentially cause the research to fail and that the students might need to start their research from the beginning once again.

The Rector immediately responded to both Deans’ concerns. Regarding the building, the university had done their best. The current building, built to reflect the trend at present, was respectively related to the attempt to evaluate the initial blueprint which adopted the square design, just like the current one.

“Alhamdulillah after the alteration, it was no longer built in squares. The concerns and limitations of the FMIPA building would be fixed. We would also fix the hall this year.”, as explained by Prof. Samsul Rizal.

Regarding problems with the lift, the Rector was hoping that there would be sustainable maintenance. In the future, USK would work with the experts to fix the lift problems. This would also benefit other buildings in the other faculties that also have lift, not only in FMIPA. Later, the lift would use card access and will be prioritized for lecturers over 50.

“Just like the lift in the Faculty of Economy and Business, it could only be accessed with cards. We plan to do the same in the other faculties. The young lecturers, those who are still at their 30s may use the stairs. I personally like using stairs as it is a part of exercise. We could also check our heart rate. Lecturers over 50 would be prioritized to use lift with cards.”, the Rector explained.

At the end, Prof. Samsul Rizal showed his appreciation to both faculties for their achievement in the number of research and high rate of community services. The Rector wished that they maintain this achievement and if they could, expand it. This had such positive impact on USK’s growth and development.

“Alhamdulillah. I am so proud of both FMIPA and FKP for their vast number of research. We had the most numbers of lecturers and studies from these faculties. We may still have shortenings on SINTA, but Alhamdulillah we have over 1000 studies acknowledged by Scopus. That was from these two faculties.”, as he applauded both faculties.

Prof. Samsul Rizal wished that for each lecturer may contribute with at least one study. Therefore, USK may make up for the shortcomings of research from the social science departments. “This year, we targeted to have 1000 studies.”, as he optimistically said.