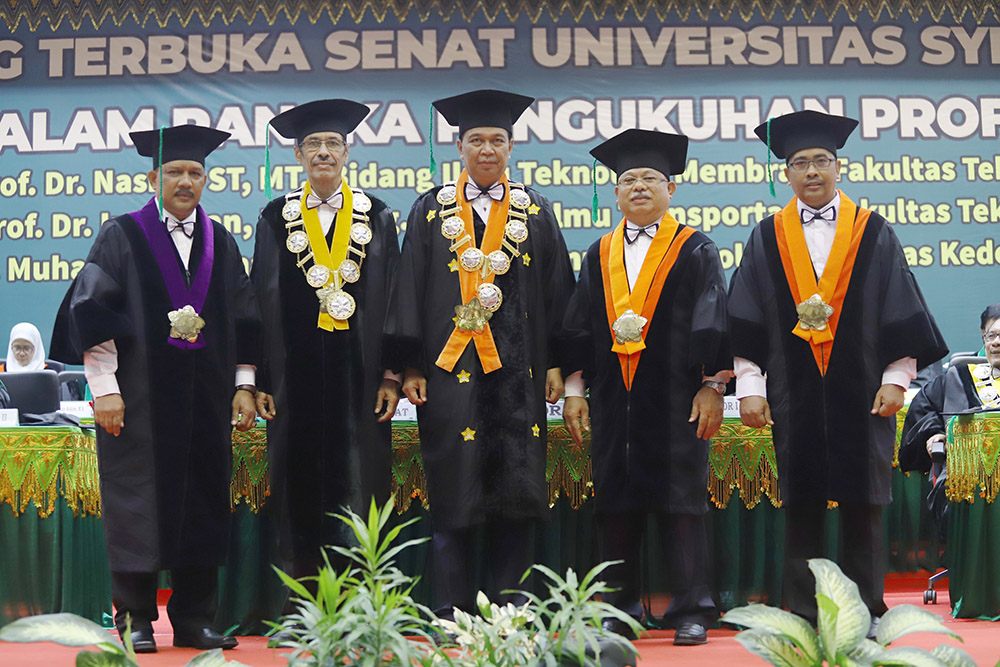 Interestingly, two of the three professors came from the Faculty of Engineering, even from the same department, the Electrical Engineering Department. Furthermore, they are from the same house, because they are a marrid couple, Prof. Khairul Munadi and Prof. Fitri Arnia. While Prof. Taufik Fuadi Abidin is from FMIPA Unsyiah.

Then the three professors read their scientific oration. Starting from Prof. Khairul Munadi with the title, Development of Smart Devices for Early Detection of Diseases Based on Thermal Imaging and Deep Learning.

In his opening remarks, after the inauguration, the number of Unsyiah professors became 76 people. This number is only 4.8% of the total number of lecturers in Unsyiah.

Nevertheless, the rector was grateful that the growth in the number of Unsyiah professors in the past year was quite encouraging. In the same period last year, there were only 58 Unsyiah professors. This means, in 3 years there has been a growth of 31%.

"After today, several new professors are back waiting to be confirmed in the near future. Meanwhile, several other professor candidates are completing requirements or even waiting for a decision from Jakarta, "said rector.

Rector also considered the expertise of the three professors as very important. For example Prof. Khairul Munadi whose research is about thermal imaging, which is a method of observing an object through a thermal sensor, or thermal camera, without touching the object being observed. 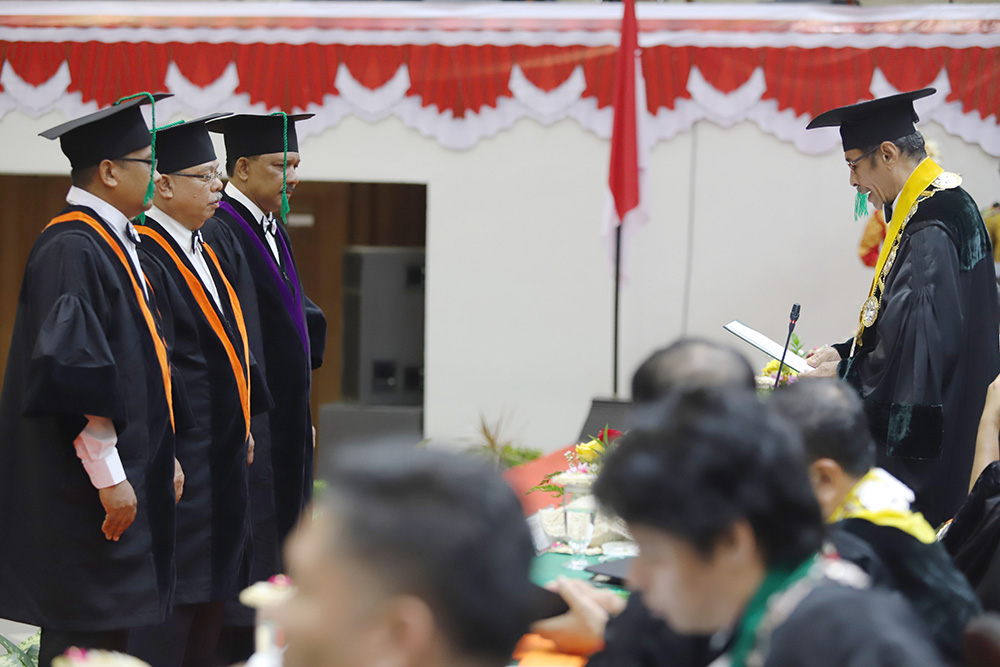 The main idea of Prof. Khairul Munadi is building intelligent devices by integrating thermography and Deep Learning techniques to detect diseases early, whose symptoms are related to changes in human body temperature. This idea is quite potential as an alternative solution to anticipate the spread of Corona virus outbreaks.

"The target of this research is to produce early detection devices, for dangerous chronic diseases with high accuracy. Then this finding is expected to be applied to help paramedics, or individuals, to carry out disease checks independently, "said the rector.

The same goes for Prof. Taufik Fuadi Abidin, whose research is about the use of machine learning and big data technology. This has been tested in the process of determining web pages quickly and accurately, even with billions of web pages.

Prof. Taufik even managed to build a web classifier, which was used to quickly and accurately determine web pages about tropical diseases using the machine learning algorithm Support Vector Machine.

One contribution of Prof. Taufik in the field of machine learning, which is directly applied in Unsyiah is the determination of the category of Single Student Fair Tuition (UKTB), which is actually a classification problem or supervised machine learning problem.

Along with the development and needs of the era, the study and utilization of machine learning and big data will develop very quickly in the future, because after all, the volume of data in all fields will continue to increase significantly.

"Prof.'s expertise Taufik is increasingly needed in the future. And Unsyiah is very fortunate to have her expertise in machine learning and big data, to some extent it has been instructed to all our students, "the Rector said.

Then Prof.'s expertise Fitri Arnia is also very important to understand the historical background of all events today. Ancient documents contain important information in the past that can help humans to better understand previous history.

Prof. Fitri Arnia succeeded in digitizing ancient manuscripts, binaryized them and applying optical character recognition systems for the recognisation process. He offered the use of multipeak assumption assumptions to anticipate noise and graying of the ancient documents.

She also offers a new technique for Jawi character recognition, using the Tree Root Algorithm. This algorithmic system does not use complex mathematical calculations, but uses a simple classification process, and requires less storage memory.

"This field of study has a high urgency, especially for Aceh which is said to have an extraordinary history, but has not been explored optimally using information technology. This can be started by restoring ancient documents and manuscripts that are already available, "said the rector.