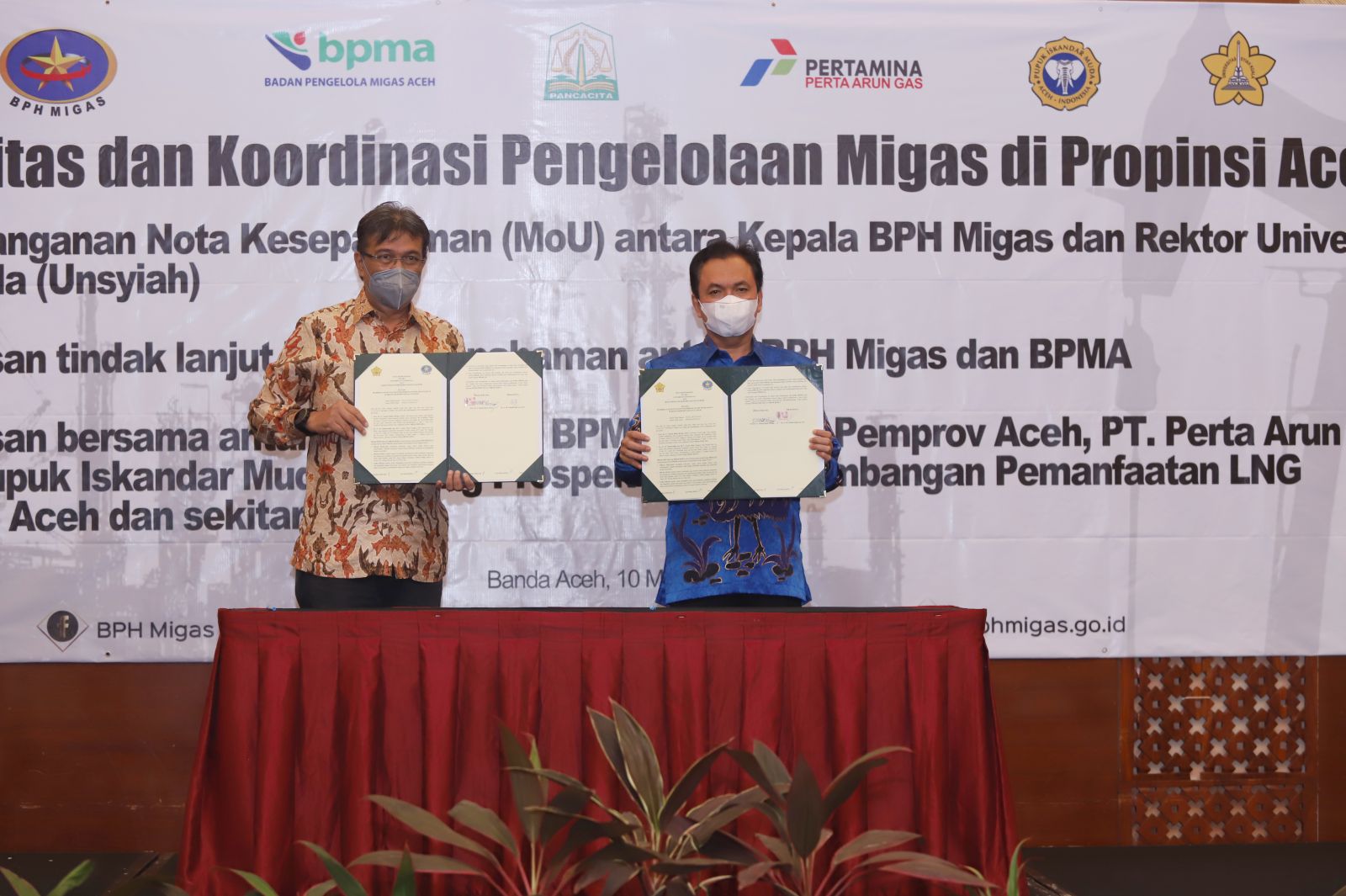 The Downstream Oil and Gas Governing Agency (BPH MIGAS) initiated a cooperation with Universitas Syiah Kuala (USK) to develop the oil and gas sectors in Aceh and national level. An MoU to realize this goal was then signed by the Rector of USK, Prof. Dr. Ir. Samsul Rizal, M.Eng and the Head of BPH MIGAS Dr. Ir. M. Fanshurullah Asa MT in Hermes Hotel. (Banda Aceh, 10 May 2021).

This cooperation is a part of a series of cooperation based on a memorandum between BPMA and BPH Migas signed on 17 February 2021.

Following that, a discussion was held between BPH Migas, USK, the Aceh Government, Perta Arun Gas Company and Pupuk Iskandar Muda Company about the prospects of gas and oil development in Aceh.

The Rector showed his appreciation for BPH Migas trust so that the university may support the oil and gas management in Indonesia.

This cooperation would involve several sectors including joint research and planning with downstream oil and gas, human resources development in oil and gas sector, joint usage of research facilities, infrastructures, and other equipment by both parties, experts allocation as consultant or part-time, exchange of information, research data, and others.

According to Rector, this cooperation is very important for USK because it would support the Kampus Merdeka program in USK. This way, the students would be able to join an internship program in BPH Migas.

Before signing this MoU, USK had also had a cooperation with Perta Arun Gas Company for the development of oil and gas supporting equipment.

This newly established cooperation could be made official by also considering USK’s human resources where 300 of the lecturers were PhD graduates from leading universities in the world.

“Thank you for the trust that BPH Migas have on us. We are ready to collaborate with you because we believe that currently USK has one of the best human resources and infrastructures.”, Rector said.

Meanwhile, Fanshurullah Asa explained that BPH Migas has also opened up an opportunity for collaboration with 34 Indonesian universities of which 8 had signed the MoU.

USK became the 9th university to sign the MoU with BPH Migas. Nevertheless, Fanshurullah also believed that USK is quite special with its productivity.

Therefore, BPH Migas also see this cooperation as something important and thus travelled to this western part of Indonesia to make it happen.

“We believe that this MoU is special as we ourselves travelled 3000km to personally be here. We did the other MoUs via Zoom only, but not with USK because we know how productive USK is.”, he said.

The head of BPMA, Teuku Mohamad Faisal said that they also fully support this cooperation. He also sees this as a synergy between two national bodies which would be able to support each other.

“We wish this cooperation would be followed up. And BPMA would also join and support the memorandum.”, he said.

At the same time, the Aceh Government, represented by the Economy and Development Assistant of the Aceh Regional Secretariat, Ir. Mawardy also supported the MoU. He believed that this MoU was to support oil and gas management in Aceh and therefore congratulated the other parties for this MoU.

“I hope that the points in this MoU could be realized following the guide of UU No. 6 2011 about Aceh Government and PP No. 23 2015 about joint management of natural  oil and gas resources in Aceh.