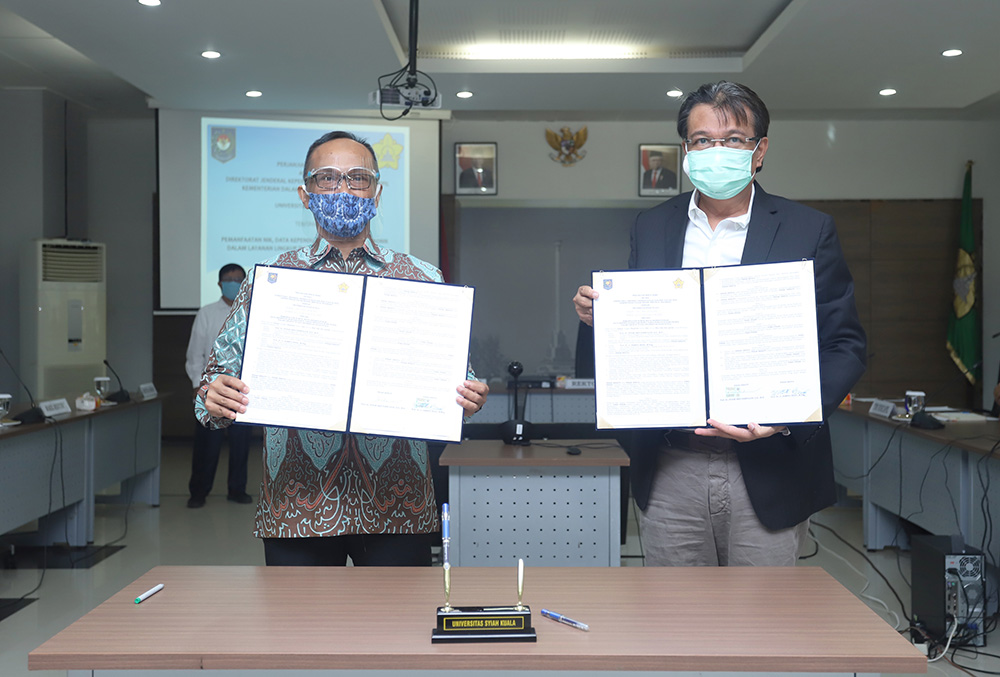 Syiah Kuala University (Unsyiah) and the Directorate General of Population and Civil Registration of the Ministry of Home Affairs of the Republic of Indonesia (Ditjen Dukcapil Kemendagri) in the near future are planning to integrate Student Identity Number (NIM) into the Population Registration Number (NIK). This step is part of an effort towards a single identity number.

Prof. Samsul said this integration would try to be implemented in the new school year 2020. The integration of this identity number was to facilitate verification of student data and work effectiveness. This method can also help Unsyiah track and gather alumni who are scattered in many areas.

"This step is to support government programs that are promoting data transformation to a single identity number. So everyone has one identity number for many purposes, "said Prof. Samsul.

This cooperation is also to make the functions and roles of both parties effective in verifying and validating data, both for prospective students, prospective lecturers, to the Unsyiah academic community. The Chancellor also hopes that this cooperation can continue in other fields. Moreover Unsyiah has many IT experts who can help Dukcapil in data management, so that it is beneficial for nation building.

Director General of Dukcapil Kemendagri, Prof. Dr. Zudan Arif Fakrulloh, SH., MH. said it had collaborated with more than 2,300 institutions to strengthen big data in Indonesia. There are several campuses in Indonesia that have integrated student ID numbers into NIK. Unsyiah is listed as the first university on the island of Sumatra to sign this collaboration. He also appreciated the Unsyiah step which helped the Government enter a new era of population registration.

"At present, the development of Dukcapil technology is entering the era of sharing. The data we have is used for the progress of the nation. Of course by paying attention to legislation. Data can be used, but must not be misused. " said Prof. Zudan

He mentioned that one of the big problems facing Indonesia at present was data collection. With the concept of big data that is precise and complete, then everyone will be well recorded. The same thing will happen in Unsyiah if it transforms student ID numbers into NIK.

"So all students and alumni will be recorded well. Unsyiah will know where they work, where they live, what their expertise is, to their achievements. This makes it easy for Unsyiah to track the alumni, "continued Prof. Zudan

The signing of this cooperation was also witnessed by Deputy Rector IV Dr. Hizir, Deputy Rector II, Dr. Ir. Agussabti, faculty dean, and academic community. On the same occasion, a webinar public lecture was also held, which was attended by participants from various regions in Indonesia. (Unsyiah /PR)