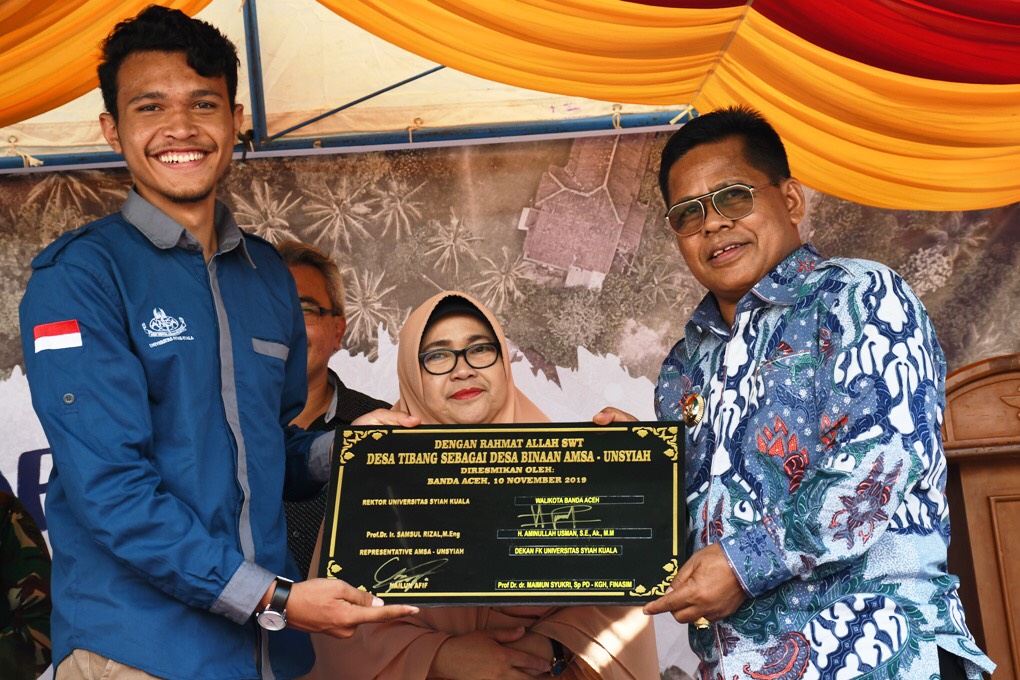 The Mayor of Banda Aceh, Aminullah Usman, expressed his appreciation for the implementation of the Social Service (Baksos) which was carried out by students of the Faculty of Medicine (FK) Unsyiah. Tibang Village, Syiah Kuala Subdistrict, Banda Aceh was chosen as the Assyiah Asian Medical Students' Association (AMSA) Village, a student organization engaged in the medical and health professions.

"We support this event, this activity is in line with the vision and mission of the Banda Aceh City Government in the field of health. We would like to welcome and thank AMSA-Unsyiah for carrying out this very useful activity," Aminullah said in his speech, Sunday, November 10, 2019 in the courtyard of the Baitussalam Mosque, Gampong (Village) Tibang.

He continued, through the health service program that was held together with AMSA-Unsyiah, it was hoped that the community, especially those in the target villages, were able to take advantage of the moment to get to know health information.

"With the free health services provided, it is hoped that the community will understand more about the importance of maintaining health," Aminullah said.

In addition, the Mayor also advised AMSA and the target village communities to be able to maintain the cleanliness of the surrounding environment. According to him, by keeping the environment clean it will have a good impact on health.

"From the other side we also see, this activity has indirectly been involved in efforts to develop the city towards a better direction," he explained.

He also hopes that in the future AMSA-Unsyiah will continue to contribute and become a partner of the City Government in the development of Banda Aceh City, especially in the health sector. "If the community is healthy, welfare can be achieved," he said.

The head of the organizing committee, M Alfian Zainal said, the event with the theme "A determination to make a healthy village with Amsa-Unsyiah" was held in more than 20 series of events held in two visits each month.

The series of activities carried out aims to educate and provide free health services to the community. Some events include home visits, counseling, examinations, health bazaars, gymnastics, training, competitions, health consultations and so forth.

"Later the event will be filled by a team of specialist doctors, general practitioners, young doctors and all members of the AMSA-Unsyiah. The target for the event includes all elements from all the villages of Tibang and the Shia Kuala sub-district, which includes pregnant women, infants, children, teenagers, adults, the elderly , health cadres, youth village, school students, "he concluded.

The activity ended with the signing of the First Stone of AMSA-Unsyiah fostered villages which was signed by the Mayor of Aminullah together with AMSA-Unsyiah Representative, Nailul Afif.