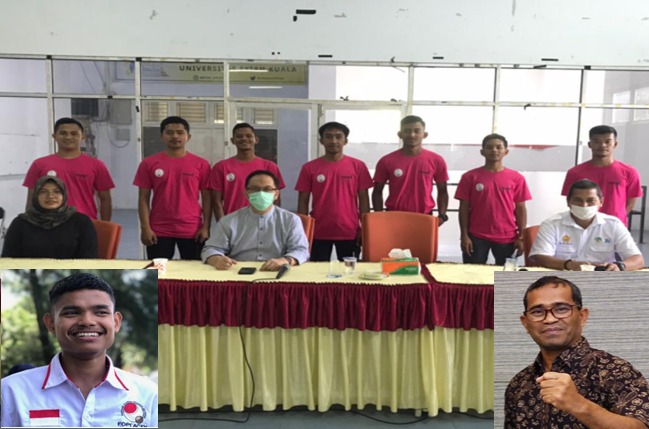 The supervisor for Pentaque, Drs. Abdurrahman, M.Kes mentioned that they sent 9 athletes consisting of 8 male and 1 female athletes. The team trainer, Novi Lidya Isdarianti, S.Pd., M.Pd from USK also accompanied the team in this event.

Technically, the scoring in this year’s PANTASI was done through video. Each participant was required to send a video via Telegram to the committee and thus was evaluated by the board of judges. The results were then announced on 29 July 2021 at 15:00 WIB.

Drs. Abdurrahman, M.Kes who was also the General Chairperson of the FOPI Aceh Provincial Government mentioned that the training that they had been going through in the Pentaque FKIP field had brought good results as expected.

“With the presence of new students, we can recruit more athletes to improve the achievement on pentaque in Aceh.”, as Abdurrahman said.

Meanwhile, Vice Rector III of Universitas Syiah Kuala, Dr. Ir. Alfiansyah Yulianur BC also showed his high appreciation to these students’ achievements. The pentaque sport is now developing in USK, and this is not their first win.

“I wish that these achievements would be well maintained so that this sport may become an icon in USK. “, as the Vice Rector said.

PANTASI, which is the “National Student Achievement Week”, was held by the Faculty of Sports Science from Universitas Negeri Semarang. This event is a national sports event aiming to propel the young people’s growth and accomplishment as well as to increase their reputation in the fields of sports, sciences, and arts.

This event held competitions for athletics, archery, pentaque, aerobic & dance, basketball, science, and creative video. This event is scheduled to take place every 2 years. This year’s competition was held virtually for the first time from 12-29 July 2021.