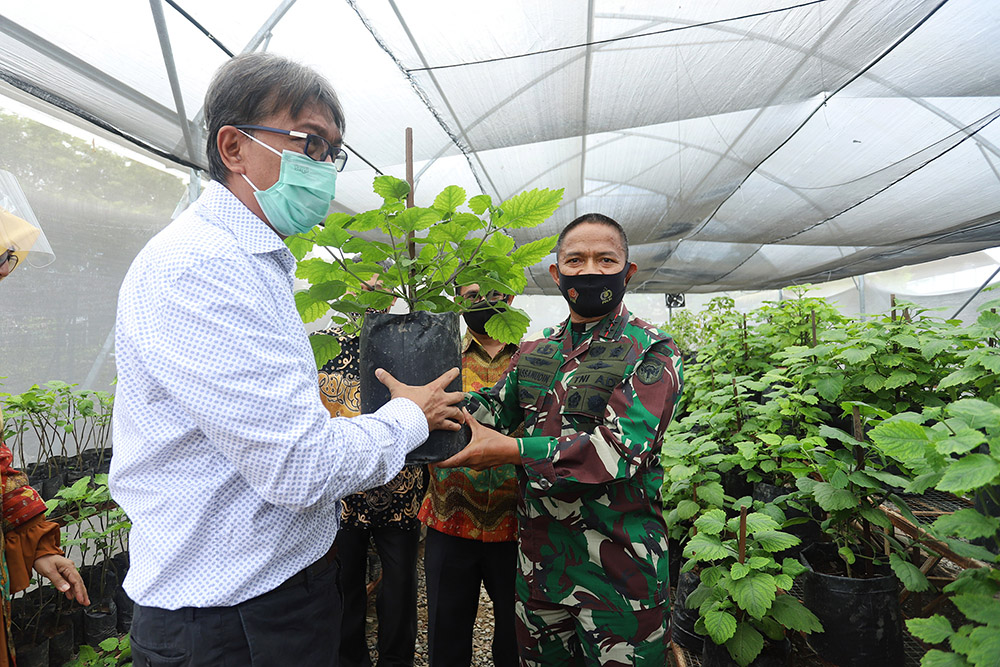 Iskandar Muda Regional Military Command Commander Maj. Gen. Hassanudin, S.IP., M.M said he was ready to provide support to Syiah Kuala University in its efforts to develop the patchouli industry in Aceh. This commitment was conveyed by the Pangdam during his visit to Unsyiah which was welcomed by Unsyiah Rector Prof. Dr. Ir. Samsul Rizal, M.Eng at the Unsyiah Senate Hall (9/16).

So far, Unsyiah through the Atsiri Research Center (ARC) has conducted a lot of research for the development of patchouli quality in Aceh. For this reason, the Pangdam considered, it would be a shame if the research results did not get the full support of all parties.

Hassanudin revealed that Iskandar Muda Regional Military would provide support in the form of assistance to the community. He promised to move the community to want to pursue patchouli farming. This is in accordance with the functions and duties of the Regional Military Command, namely territorial functions. The Pangdam hopes that this commitment will not only be ceremonial but can be realized immediately.

"It's a shame if the research results are so good, with the existing regional potentials, we don't support it. So it remains only to synergize, our role is to support, provide assistance, make this activity a success, "he said.

Rector said that the research produced by ARC Unsyiah had made an important contribution to reviving the glory of patchouli in Aceh like the past. Through this research center, Unsyiah wants to introduce new innovations with science-based technology and processes. Starting from nursery to distillation, it can produce high levels of patchouli alcohol.

After conducting research, the rector continued, Unsyiah was ready to do community service. Providing education about the right patchouli, so that it can produce a high selling value. Therefore, the support of the Pangdam at this stage is very important.

"We invite the Commander, because he has troops to the villages, to invite people to want to plant patchouli. And Unsyiah is committed to stable prices, "said rector.

Meanwhile, the Head of Bank Indonesia for Aceh Province, Zainal Arifin Lubis, welcomed the support from Hassanudin. According to him, several countries in Asia such as Vietnam have used this method, which involves the army to mobilize the community in developing the agricultural sector.

Bank Indonesia also frequently invites banks in Aceh to examine the economic potential of patchouli, which has a huge impact on the regional economy. As well as having a very profitable business potential for banks.

"We believe that the professionalism of the TNI can increase the realization of patchouli to become champions in Aceh. In fact, the calculations are not only Aceh, but the national contribution by increasing Indonesia's exports, ”concluded Zainal.