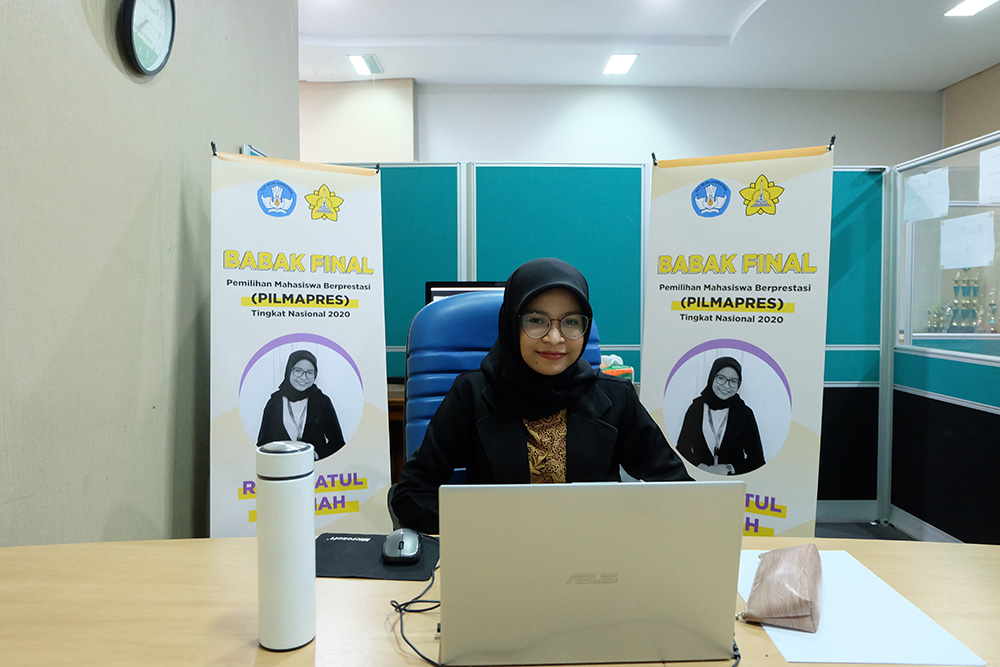 Raudhatul Jannah, a student from the Faculty of Law, Syiah Kuala University managed to bring pride at the national level in the Selection Of Outstanding Students (Pilmapres). Raudha made it to the final round in this event and won 9th place out of 20 other undergraduate students throughout Indonesia. (9/14).

Therefore, Alfian considered, Raudha's success was a pride for Unsyiah. This success, added Alfiansyah, was able to spark enthusiasm for other Unsyiah students to continue to excel at the national level.

"Since changing to become outstanding students, recently we can enter the finals. Can occupy the ninth position, so this is an achievement to be grateful for. Especially Unsyiah, who has long missed achievements like this, "said Alfiansyah.

Head of Student Affairs Supervisor Dr. Marwan, S. Si, M.T., IPM explained that Raudha's success in entering the final round of Pilmapres was an extraordinary achievement and should be appreciated.

“Raudha has gone through a long process to succeed at this stage. So this is a success that we should appreciate, "said Marwan.

Selection of outstanding students is a very prestigious competition in the student environment. This competition is organized by the National Achievement Center of the Ministry of Education and Culture. Selection is carried out in stages, starting from the university, regional and national stages.

Each participant must take several stages of assessment before arriving at the national level, namely starting from the achievement of being active as a student at the university. Students also take part in the English language selection, with the aim of seeing the extent of the participants' English skills.

"This must be fulfilled by the participants, because outstanding students are required to be able to speak foreign languages," said Marwan.

After passing this stage, participants are then required to submit scientific creative ideas. At this stage, Raudha proposed his idea with the title "Online Consultation Service System at the Unsyiah Legal Aid and Consultation Institute (LKBH) to Bring Services to the Community Victims of Sexual Violence in Aceh Province".

"From the results of the assessment of this stage, Raudha was declared to have qualified for the final round representing Aceh Province to compete at the national level," said Marwan.

"Hopefully Raudha's achievements can motivate other Unsyiah students, so that they can make Unsyiah and Aceh proud, especially at the national level," concluded Marwan.