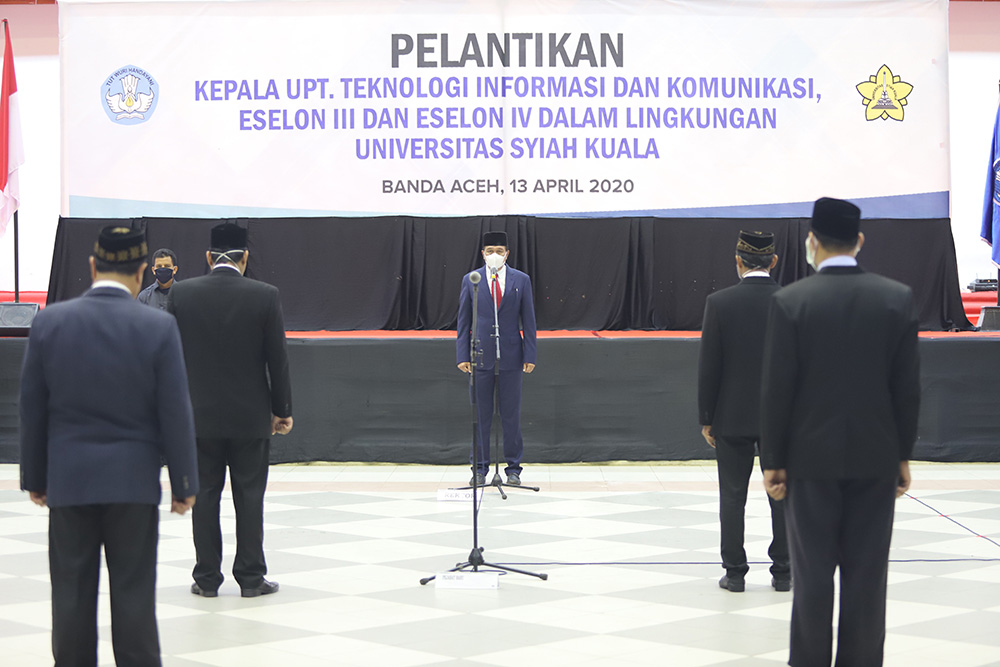 Rector of Syiah Kuala University Prof. Dr. Ir. Samsul Rizal, M.Eng inaugurated the Head of Information and Communication Technology Technical Services Unit (UPT), and a number of Echelon III and IV officials in Unsyiah. The inauguration which was only attended by a limited invitation took place at AAC Dayan Dawood. (Banda Aceh, 4/13/2020).

The inauguration process this time Unsyiah implemented physical distancing, and complied with all protocols issued by WHO to prevent the spread of Corona virus (Covid-19)

In his remarks Rector congratulated the newly appointed officials, and gratitude to the old officials who had worked hard for changes in Unsyiah.

Samsul revealed, the current outbreak of the Corona virus has changed many things in our lives. Including routine Unsyiah employees in carrying out their duties. Limited space for movement as an effort to prevent the spread of this virus, greatly affects the implementation of various work programs in Unsyiah.

Nevertheless, the rector reminded that Unsyiah employees continue to work optimally. Even in the condition of Work from Home, the tasks that have been carried out must be able to be completed in a timely manner.

For example in the near future, the Academic Bureau has begun to print diplomas for Unsyiah graduates. Even though Unsyiah has decided to postpone the graduation ceremony this time around, Unsyiah graduates still get a diploma in May.

"We understand the current conditions, but that should not make us relax. You still have to work optimally, so that there are no jobs left, "the Rector said.

Specifically for the UPT TIK Unsyiah work unit, according to the Chancellor, these days are difficult days for the work unit. Because the current conditions require Unsyiah to apply online lectures to students. Then this will be a burden for UPT TIK Unsyiah, which has been the spearhead of the information technology system at Unsyiah.

For this reason, Dr. Nizamuddin, M.Info.Sc. who is currently inaugurated as the Head of UPT TIK Unsyiah, Samsul hopes that he and his staff will continue to work vigorously for the smooth online learning process.

"Once again, I congratulate the brothers who are appointed today. Furthermore, let's work with integrity to bring about better change in this institution, "said Rector.