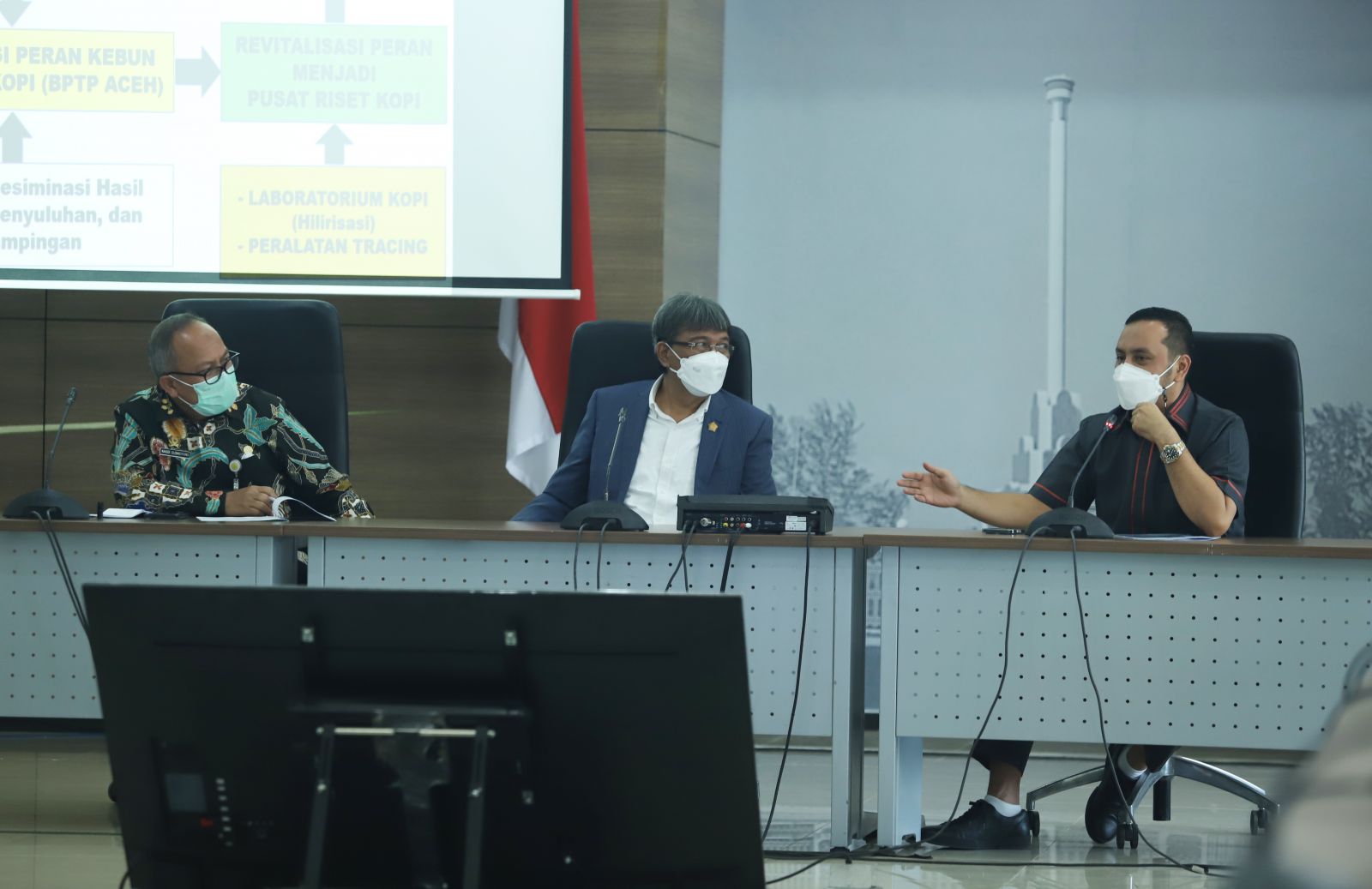 The Ministry of Agriculture (Kementan) had invited the University of Syiah Kuala (USK) to expand the Gayo coffee industry in various aspects. This initiation was presented by the Directorate General (Dirjen) of Plantation, Dr. Ir. Kasdi Subagyono, M.Sc when he visited the campus. (Banda Aceh, 30 April 2021).

According to the Dirjen, the quality and popularity of Gayo coffee could be optimised to win more opportunities in the global market. He continued by mentioning Indonesia’s coffee production which is rated to be over supply. In the current state, the world’s coffee production reached over 10,5 million while the consumption rate did not even reach 10 million. Therefore, Gayo Coffee could be expanded with some improvements.

“I am excited and interested because USK have laboratory facilities and research centre that working on coffee and we need this. Our coffee production is limited, and so is its productivity which is less than 0,8 tons per hectare; It doesn’t even reach one ton. Thus, to increase the productivity, we need to do it with innovations.”, as explained by Kasdi Subagyono.

He expected that both the ministry, USK, and other related parties would be able to do certain things. First, there would be a need to develop new clones or coffee varieties which would increase the productivity over 1 ton. So far, the Directorate General of Plantation’s research institutions have had the clones or varieties that may produce 2,5 to 3 tons coffee per hectare.

“We would see later which varieties would be develop by USK and it is a challenge by itself. Second, Aceh is known for its Gayo coffee, so let’s discuss more and focus on this area. Later, we will see that Gayo coffee would attract the market.”, he said.

These initiations would be supported by policies issued by the Minister of Agriculture, Syahrul Yasin Limpo. One policy that had been initiated and enacted overseas was the One Day with Indonesian Coffee and Fruit. The Director General also mentioned that on his visits overseas before the Covid-19 pandemic, Gayo coffee had had a special place and sold with a high price.

Regarding the productivity, one of the Ministry of Agriculture’s strategies include the replanting action to rejuvenate the coffee. Thus, they challenged USK to develop coffee nursery which will have millions productions.

“When the expected target in Aceh is covered, let’s not stop there. It is time to expand Gayo coffee beyond Aceh. If USK acquires nursery, the markets will come from the programs run by the Ministry of Agriculture. So the productions will be absorbed immediately.”, as explained by the Dirjen.

Kasdi Subagyono once again mentioned that the Gayo coffee production must increase. They expected that the replanting process would increase the production more than the current one. For this reason, they proposed that there should be innovations to empower the coffee farmers. They also suggested a concept of farmer corporation-based area development.

“We expect that this concept would be developed and implemented by USK. The implementation process might involve lecturers and students under supervision.”, he explained.

At the same time, Rector of USK, Prof. Dr. Ir. Samsul Rizal, M.Eng greeted the Director General and his delegations enthusiastically. The university cannot wait to collaborate with the Directorate General of Plantation to develop a superior Gayo coffee, both in quality and quantity.

“Our time might be short, but we had had fruitful discussions on what we will do next. There is hope (for the coffee industry).”, as Prof. Samsul Rizal said.

In the future, USK would directly involve students to visit the coffee production areas such as Bener Meriah, Central Aceh and Gayo Lues. For the record, USK had sent students to visit the areas. The Rector expects that this program would not only allow them to focus on coffee productions but also include developing other areas related to coffee for the coffee farmers’ sake.

“To realize this goal, we want to involve students from the Faculty of Agriculture, Economy and Business, and other faculties as well. Therefore, we would have new resources to produce.”, as explained by the Rector.

USK has also intended to create a canteen, gallery, or even a coffee centre with the most complete coffee collection in Aceh to promote coffee literacy, promotion, and to be a landmark in the coffee world.