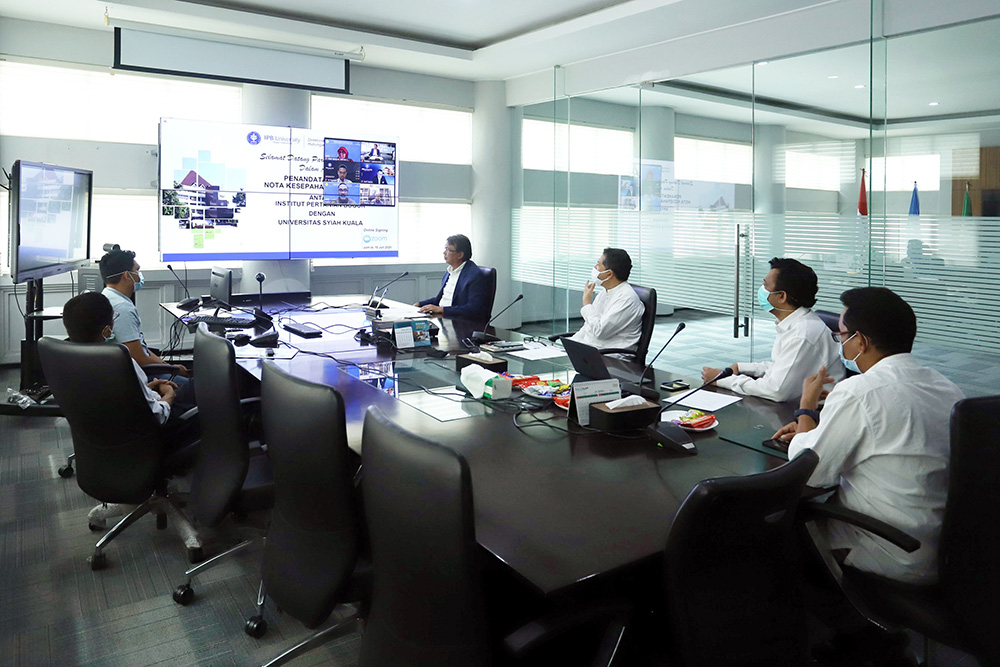 Syiah Kuala University (Unsyiah) cooperates with IPB in the fields of education, research, and community service. The signing of the MoU was carried out online by the Unsyiah Rector, Prof. Dr. Ir. Samsul Rizal, M. Eng., And Rector of IPB, Prof. Dr. Arif Satria, S.P., M.Sc. from each campus (7/10).

In his remarks, Arif Satria said, Unsyiah had a lot of things that could be synergized with IPB. Because of that Arif was very happy to be able to collaborate with Unsyiah.

Arif is also committed to making new leaps with Unsyiah in the fields of education, research, and community service. But he added, the first thing we must do is realize an independent campus program, which is free learning.

"I really want Unsyiah and IPB to immediately realize an independent learning program, where students from IPB can take college credits at Unsyiah, and students from Unsyiah can study at IPB," Arif said.

According to Arif, the campus of an independent, free learning program was marked by a mass marriage between various campuses. If this program can be controlled well, it will produce a new breakthrough in Indonesia. Graduates from each campus will become more experienced because their knowledge is not limited to one field and their insights do not only come from one place.

"I hope Unsyiah and IPB can move forward together". The lid.

Meanwhile, Unsyiah Rector Samsul Rizal said that Unsyiah had actually been working with IPB for a long time. IPB is one of the campuses that has provided support to Unsyiah so far.

According to Samsul, the leap that Unsyiah had been able to do so far was inseparable from the support of IPB, one of the biggest was the quality assurance and strategic plan guided by IPB.

Agree with Arif, Samsul agreed to immediately implement the freedom of learning with IPB.

According to Samsul, the current trend is that everything can be done virtually. This will make it easier for the campus to realize the independent learning program. The online lecture method can overcome distance and time barriers.

There are many things in Unsyiah that can be used as research material and development projects, one of which is patchouli. Samsul also hoped that the cooperation between Unsyiah and IPB could produce new breakthroughs in the future.