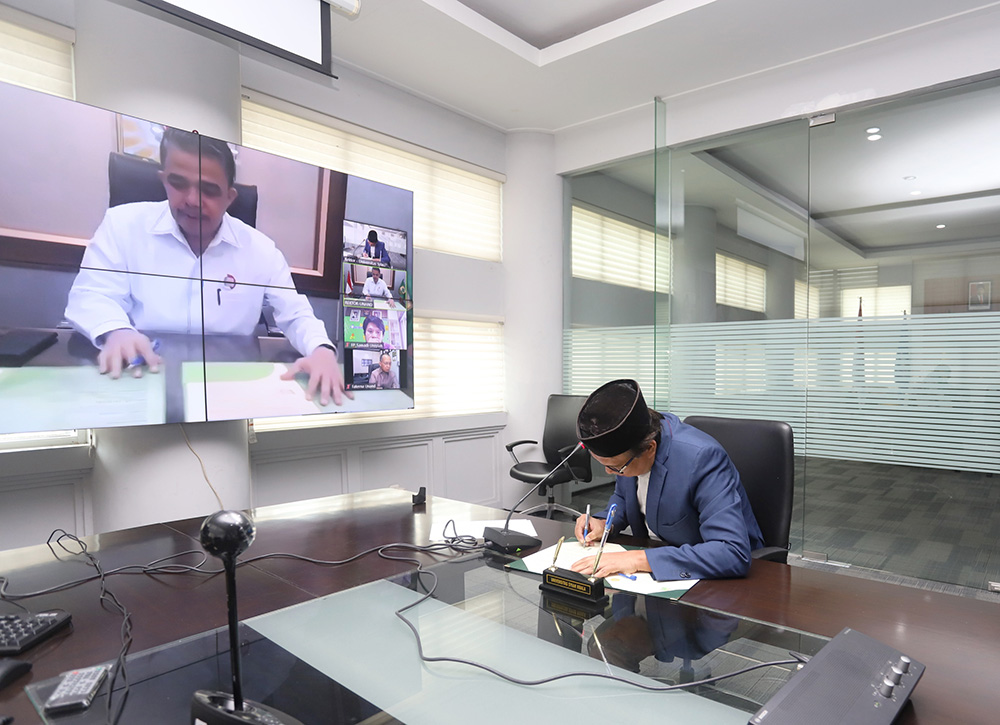 Rector of Syiah Kuala University Prof. Dr. Ir. Samsul Rizal, M. Eng invited Andalas University to collaborate on research in the field of disaster. This was said by the rector at the signing of the MoU with the rector of Unand Prof. Dr. Yuliandri, SH, MH virtually from Unsyiah's Rector Mini Room. (Banda Aceh, 7/6/2020).

Unsyiah's rector judged, if seen both historically or geographically, the two universities actually had a strong relationship. Acehnese and West Sumatran people have for hundreds of years established close cooperation especially in the field of religion.

While in terms of geographical, the two universities are both in the ring of fire. This condition makes Aceh and West Sumatra very vulnerable to disasters.

For this reason, Unsyiah’s rector invited Unand to conduct joint research in the field of disaster mitigation. The collaboration between the two, the Chancellor hopes, can produce publications that are useful in the effort of Disaster Risk Reduction (PRB).

Especially now that Unsyiah has a Disaster Study Center, the Tsunami Disaster Mitigation Research Center (TDMRC), which has a Science and Technology Center.

"I see professors at Unand write a lot about disaster. So I am sure, if researchers from the two universities collaborate, this will increase our publications in the effort of Disaster Risk Reduction (PRB), "said Samsul.

In addition, the rector also expressed his gratitude for Unand's contribution so far for Unsyiah's. For example in Unsyiah's effort to establish the Faculty of Medicine in 1982. Where before that was 1980-1981, Unsyiah sent a number of his students to study at Unand. They were prepared to become lecturers at the Unsyiah Faculty of Medicine.

Another important contribution was when Unsyiah succeeded in achieving the accreditation leap from C to A. This was inseparable from the role of Unand who had first achieved accreditation A. Whereas the Unsyiah Rector specifically invited Prof. Dr. Werry Darta Taifur, SE., MA, who currently serves as Chair of the Unand Senate, to provide motivation and guidance for Unsyiah.

"So we want Unand and Unsyiah to continue to have intense communication. If not, then we will continue to be behind other universities on Java. Even though in terms of human resources, we are very good, "said the rector.

Meanwhile Prof. Yuliandri welcomed a number of cooperation agreements with Unsyiah. This is also in line with the spirit of the Merdeka Campus which is echoed by the Minister of Education and Culture. Where every university should not stand alone, but must collaborate with other universities to strengthen their institutions.

During this time, said Prof. Yuliandri, several study programs as well as faculties at Unand have carried out various collaborations directly with Unsyiah.

Therefore, Prof. Yuliandri considered this cooperation agreement to be an important foundation for Unand to develop various programs or activities with Unsyiah going forward.

"This MoU is the basis for us. This is actually the basic essence of Unsyiah and Unand cooperation, that is, we want to jointly develop opportunities for cooperation in various fields, "he said.

This virtual meeting was moderated by Vice Rector IV Unsyiah Dr. Hizir was also attended by other Vice Rector, as well as several Faculty Deans in Unsyiah.