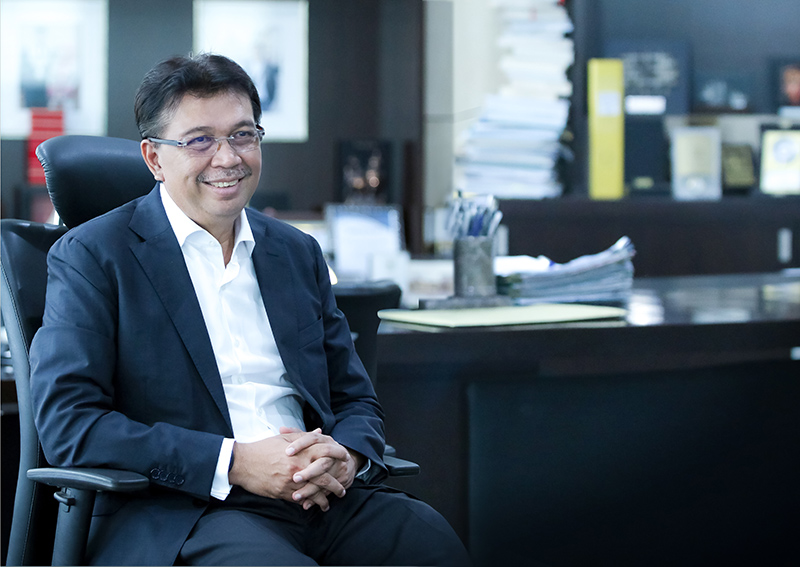 Rector of Syiah Kuala University (Unsyiah), Prof. Dr. Ir. Samsul Rizal, M.Eng.IPU together with the Covid-19 Unsyiah Council of Professors and Task Units, proposed that the Aceh Province immediately implement limited isolation for 21 days. This proposal was submitted in the form of a Letter of Recommendation on the Application of Limited Isolation in Aceh, which was sent to Plt. The Governor of Aceh, Ir. Nova Iriansyah, MT on March 28, 2020. Copies of this recommendation were also submitted to the Minister of Education and Culture of the Republic of Indonesia.

Prof. Samsul assessed, the application of limited isolation for 21 days was important because based on the mathematical model conducted by the Unsyiah Covid-19 Task Force, it was predicted that the largest outbreak of the virus would take place within the next 21-22 days. For that, it takes quick steps to turn off the virus space.

Unsyiah assessed that limited isolation must be done immediately considering the number of positive cases of Covid-19 Aceh continued to increase in recent days. The spread of the virus is considered to be more dangerous because of the limited testing of swabs and the lack of supervision of People in Monitoring (ODP) and handling of Patients in Monitoring (PDP). If there is an increase in the number of PDP Covid-19, medical treatment in Aceh is estimated to be constrained due to the lack of health facilities, limited self-protection equipment (PPE) for health workers, and reduced number of health workers due to having to isolate themselves after handling patients. This condition according to the Chancellor will further complicate the situation, and become a threat to the community.

"For this reason, we propose that Aceh be immediately limited to isolation before the situation gets worse. Quick steps must be taken to reduce the spread of the Covid-19 virus, "said Prof. Samsul, Saturday (3/28/2020).

In the recommendation, Unsyiah conveyed 16 proposed prevention efforts that must be carried out by the Aceh government so that limited isolation can work well. The proposal is like enforcing strict rules for the community to isolate themselves, establishing Commander of Kodam Iskandar Muda as the Coordinator for Implementing isolation, involving TNI and Polri to closely monitor the community to the village, providing quarantine for PDP throughout Aceh, accurate data collection on ODP and PDP, conduct rapid tests, to provide accommodation for health workers who carry out self-isolation.

"We also consider it important for the provincial government to immediately close the access routes to Aceh both land, sea and air and stop inter-city public transportation. Because so far, the positive cases of Covid-19 in Aceh, almost all of them have a history of travel from outside Aceh. Of course this closure is an exception, especially for logistical transportation and medical interests." continued Prof. Samsul.

In addition, Unsyiah also recommends closing all public places, such as tourist sites, coffee shops, parks, night markets, and taking government and private offices off. Prohibiting forms of crowd, including religious social activities is also considered important to do. The Aceh Provincial Government was also asked to increase budget allocations for preventing the spread of the virus, disinfection in public places and housing, as well as carrying out fardu kifayah on PDP and positive patients who were accompanied by security forces and following the provisions of the MPU Aceh.

"If this limited isolation is carried out, it is also important for the provincial government to provide assistance for basic needs for poor families that can be distributed by village officials and security forces," continued the Chancellor.

Prof. Samsul hopes that this recommendation can become a reference for the provincial government in taking action. He hopes that quick steps can be taken immediately for the benefit of the people of Aceh.