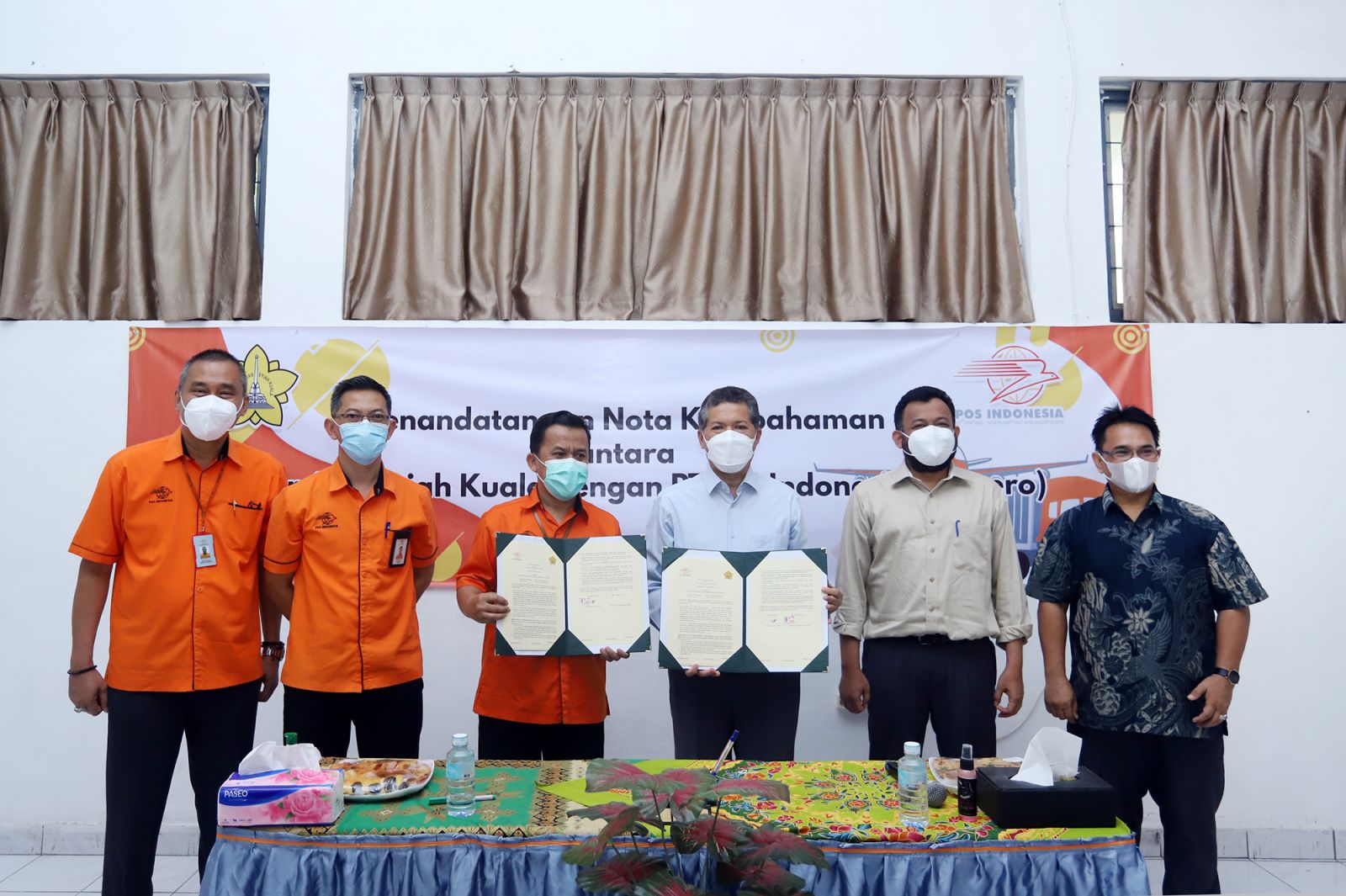 Universitas Syiah Kual (USK) has signed a MoU with PT. Pos Indonesia in the Central Post Office of Banda Aceh. The collaboration involves a couple of sectors of Tri Dharma Perguruan Tinggi including the Education, Research, and Service (Banda Aceh, 23 July 2021).

In his speech, the post office representative, Dino, expressed his appreciation for USK’s decision on working with the Aceh Region Office of PT. Pos Indonesia. He then hoped that this collaboration may later expand to many other sectors including exporting.

In terms of the education sector, PT. Pos will be involved in the Kampus Merdeka program where USK students would help manage the smaller branches.

“We have also formed collaborations with other universities that are also developing the Kampus Merdeka program. We give them opportunities to be involved in the operational management of the small branches. That way, they would also directly learn about the business operation.”, as Dino explained.

“It is not an individual but a collective activity. It can also work under USK’s Business Development Agency. They will have to participate for 6 months which weighs 20 credits of their university study.”, Dino continued.

Dino also added that in the post office, students would apply the theories and other skills they have learned and developed in the university. They could also learn about business planning, marketing, management, and so forth.

“It is not just a theory, but students would also practice skills such as management, marketing, and communication techniques.”, Dino said.

Meanwhile, the Vice Rector I of USK, Prof. Dr. Ir. Marwan also showed his appreciation to PT. Pos for this collaboration. He hoped that USK’s products may be well-known in the world and that they would be delivered to the designated countries.

“I hope we can succeed this collaboration together and develop it to include other sectors. Some products that USK has are innovations on patchouli essential oil and other kinds of essential oils. We would need the touch of digital marketing to scale this up, and PT. Pos Indonesia would make a good partner for this purpose.

USK wants to introduce Aceh products through the post services including the patchouli essential oils and other patchouli oil-based products. If everything goes well, USK plans to do its first export in August to two countries in Southeast Asia.

“For starter, we plan to meet the demands from Malaysia and the Middle East. Later, we would target West, East, South Asia, and Africa.”, as the Vice Rector I explained.

Other than that, as a university that upholds and practices the Tri Dharma Perguruan TInggi, Prof. Marwan highly welcomes the idea of having USK students to learn and practice in the offices. USK is prepared to assign their students to have a practical experience there. That is not to mention that the post office branch is also located around the university.

“We strongly support academic-based business. Insya Allah we can learn in PT. Pos Indonesia. The community would also benefit from the services we give.”, he said.

The signing was also witnessed by the attendees that include Vice Rector IV of USK, Prof. Dr. Hizir Sofyan and the Head of Pos Indonesia Aceh Region, Fendy Anjasmara.