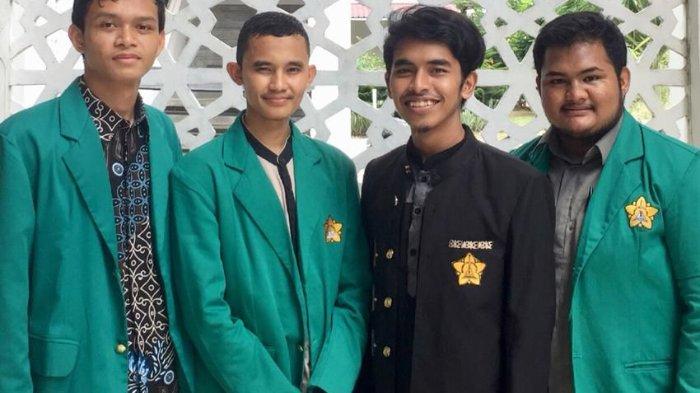 The Kafilah team from The University of Syiah Kuala (USK) Banda Aceh has made a great achievement on the national-level Students’ Musabaqah Tilawatil Quran (MTQM) competition held by The Yogyakarta State University (UNY) on 3-4 April 2021 by getting the first place on the Fahmil Quran branch competition.

“Alhamdulillah, our Fahmil team managed to win the first place with the total score of 1.065. In the final round, we won over Muhammadiyah University of Yogyakarta (UMY) and University of Malang (UM).”, as said by the Kafilah team leader, Faturrahmi, Ssi Msi who is also head unit of the Islamic Development and Companion Program (UP3AI) USK.

The Head of Students and Alumni Affairs Division of USK, Dr drh Mustafa Sabri MSi, in his press conference as reported in Serambinews.com mentioned that the members of the Fahmil team include Muhammad Iqbal Fathani, Iban Nazza Alkarimi, and Ahlul Ramadhana. The three students are majoring in the Civil Engineering program in USK.

M. Iqbal Fathani was also a part of the 2019 Fahmil team who won the national title in the 2019 MTQMN held in USK. Meanwhile, Iban Nazza and Ahlul Ramadhana were freshmen on bacth 2020.

“This online competition was carried out with the theme of ‘Developing the Qur’ani Generation to a Civil Indonesia in the Pandemic Era’. Among the competitions are Tilawatil and Tartil Qur’an, Hifzil Qur’an, Khattil Quran, Fahmil Qur’an, Syarhil Qur’an, Scientific Paper on the Qur’an Content, Scientific Debate on Qur’an, and Qur’an Application Design competiton.”, Mustafa added.

The Vice Rector III of USK, Dr Ir Alfiansyah Yulianur BC also mentioned that this event could serve as a warming up for the upcoming 2021 Students’ National MTQ which is held annually under the supervision of National Achievement Center, Directory of Learning and Student Affairs, The Ministry of Education and Culture of Indonesia.

“The National MTQM competition is planned to be held later on September or October this year”, as said by Dr Ir Alfiansyah Yulianur BC.

Earlier this year in January, USK had the chance to hold an online National MTQM. There were about 75 Universities in Indonesia who also joined in this event. At that moment, the Kafilah team of USK succeeded in securing the title of Grand Champion.